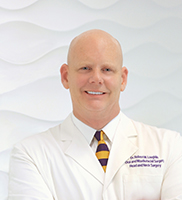 Dr. Robert M. Laughlin is the sixth person and the second alumnus to serve as dean of LSUSD. He served as interim dean from May 19, 2020 and was appointed dean on November 23, 2020.

Dr. Laughlin joined the school in May 2019 as head of the Department of Oral and Maxillofacial Surgery and Chief of OMS for Our Lady of the Lake Hospital in Baton Rouge. He is holder of the James R. Peltier Endowed Chair in OMS and will continue to serve in these roles in addition to his role as dean. He holds academic appointments with both LSUSD and the LSU Health School of Medicine.

Dr. Laughlin earned a BA in the biological sciences from the University of Chicago in 1998 and his DMD from the University of Pittsburgh, School of Dental Medicine in 2002. He completed his residency and general surgery internship in oral and maxillofacial surgery at LSU Charity Hospital in New Orleans in 2006 followed by a fellowship in head and neck surgery and microvascular reconstructive surgery at the University of Michigan. He also spent time as a visiting professor in the Department of Head and Neck Oncology at Shanghai Ninth Peoples Hospital in China.

Our new dean has served our country with distinction. Dr. Laughlin was in the U.S. Air Force from 1990 to 1998 and then joined the U.S. Navy in 1998. After completing his training in 2007, he joined the Naval Medical Center in San Diego, where he served as attending surgeon, residency program director, and department chairman. Dr. Laughlin provided care in support of Operation Iraqi Freedom and Operation Enduring Freedom, serving active duty military and dependents, retirees, congressional delegates and foreign diplomats.

Dr. Laughlin has extensive research experience, working with top researchers at the Uniformed Services of the Health Sciences, Department of Ophthalmology in Bethesda, Maryland, and the University of Chicago Pritzker School of Medicine Department of Surgery. His research in upregulation of bacterial virulence after surgical stress was instrumental in National Institutes of Health RO-1 funding for the University of Chicago, Department of Surgery. He has served as principle investigator and co-investigator on multiple research grants and has authored numerous journal articles and chapters in oral and maxillofacial surgery textbooks. Dr. Laughlin is the co-editor of the Atlas of Operative Oral and Maxillofacial Surgery.